Design your own Birthstone Ring. Ask for an addition for customized order. 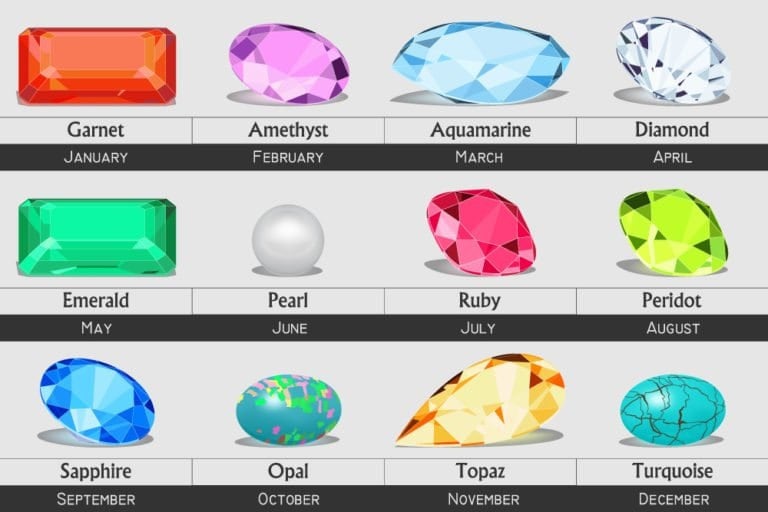 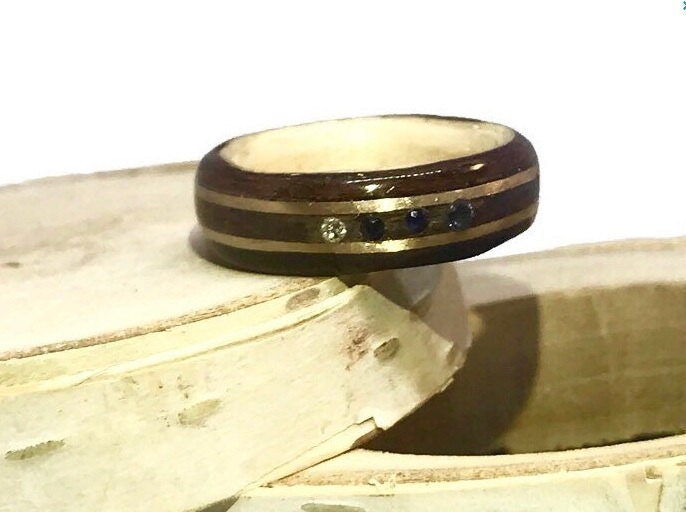 Garnet is January’s traditional and modern birthstone. Although garnets are a blend of mineral species with many commonalities, the deep red variety is most associated with January. However, garnets range in color from deep red and dark pink/purple to yellow, orange, and several shades of green. You might even find an incredibly rare blue garnet.Garnets popularly signify trust and friendship. Traditionally, this gem was believed to protect people during their travels. Due to its hardness, a garnet makes an excellent stone for jewelry intended for daily wear.“Ring, Silver, Garnet” by coolplatanos. Licensed under CC By-SA 2.0.

Amethyst has many popular associations, including serenity and royalty. Traditionally, it’s believed to provide courage and strengthen relationships. It appears as the February birthstone on both the traditional and modern lists.You can find amethysts in a wide range of violet colors, from pale lavender to deep, rich purple. While deeper hues typically draw higher values, your choice should ultimately depend on your color preference. Amethyst has good hardness as well as no cleavage. This makes it ideal for everyday wear.“Amethyst” by Mauro Cateb. Licensed under CC By 2.0.

Aquamarine is March’s modern birthstone. These gems have a wide range of blue and blue-green colors, including a deep, yet pastel, blue and a nearly clear shade of blue. Darker stones commonly have greater value. However, many consumers prefer the lighter, clearer stones in their jewelry. This gemstone exhibits good hardness and excellent transparency and clarity. Unlike other members of the beryl family, aquamarine doesn’t have cleavage or inclusions. Thus, it makes a strong, durable gemstone for jewelry.“Aquamarine Set in White Gold” by Mark Somma. Licensed under CC By 2.0.In the past, people attributed healing powers to aquamarine, especially for the heart, liver, and stomach. Today, this stone’s associations include youth, health, hope, and love.The traditional March birthstone is bloodstone. This striking green variety of chalcedony with orange and red spots had strong associations with the Crucifixion in Medieval times.“Sterling Silver Ring with Bloodstone Inlay” by Jessa and Mark Anderson. Licensed under CC By 2.0.

April boasts the well-known diamond as its traditional and modern birthstone. You can find diamonds in just about any shade imaginable. Its colors range from clear to black and every color of the rainbow in between. Though colorless diamonds are the most popular jewelry choices, other colors, such as yellow, champagne, and brown are gaining ground.Often chosen for engagement and wedding rings, diamond has long symbolized love, marriage, and courage. The hardest known material makes an excellent stone for any type of jewelry.“Day 83 – My Engagement and Wedding Rings,” 0.25-ct diamond, by slgckgc. Licensed under CC By 2.0.

Emerald, another beryl variety, has a rich body of symbolism, including associations with fertility, health, and faithfulness. This traditional and modern May birthstone has served as a symbol of rebirth throughout history. This green gem was said to have been Cleopatra’s favorite. According to traditional beliefs, this gem brings its owner foresight, youth, and good fortune. So if you have a May birthday, wear your birthstone in good health.Finding high-quality, clear emeralds can be difficult, especially in larger carat weights. However, scientists have created many treatments to improve the clarity and color of emeralds.“Earrings,” emeralds and white gold, by Mauro Cateb. Licensed under CC By 2.0.

Historically, the birthstone for June was the pearl. This organic gemstone has a long history of jewelry use that continues to this day. Many myths and legends have grown around pearls, as well. However, alexandrite, a relative newcomer to the gem world, has taken its place on the modern list.“G15 – Snowball Choker,” leather with cultivated river pearl, by InExtremiss. Licensed under CC By 2.0.First discovered in Russia in the 19th century, alexandrite was named after the future Czar Alexander II. This incredibly rare gem can also change colors. Alexandrite appears green in daylight but changes to a purple-red color beneath incandescent lighting.Alexandrite has no ancient meanings. However, some people associate it with heightened intuition and pleasure. Without question, natural alexandrites command extremely high prices per carat. If you opt for this modern birthstone, you may have to settle for a synthetic, but still very expensive, alexandrite.“Alexandrite 1,” showing color change to red under incandescent light, by P̣h rṇ̒ thiphā. Licensed under CC By-SA 3.0.In Germany as well as the Scandinavian countries, moonstone is the preferred birthstone for June.

July’s traditional and modern birthstone is ruby. This gem’s many symbolic associations include love, passion, wealth, and peace. In ancient times, people wore it as protection against evil and harm.An exceptionally hard stone, medium to medium-dark red rubies with little to no purple or orange generally demand the highest prices. Rubies belong to the corundum family. They are the red variety of this mineral. All other colors, including pinks, are considered sapphire.You may have a difficult time buying fine quality rubies. However, you can find stones of acceptable quality in a variety of shapes and sizes. Rubies make exceptional jewelry stones.“Ruby Ring,” 18k gold, treated natural ruby, and four brilliant diamonds, by Mauro Cateb. Licensed under CC By 2.0.

Peridot is the modern birthstone for August. You can find this gem in colors ranging from yellow-green to brown. However, the light green or lime green variety has the strongest popular connection to August.“Sulusso Sustainable Jewelry,” peridot solitaire, by 3BL. Licensed under CC By-ND 2.0.Traditionally, peridot symbolized strength and was used as a ward against nightmares, evil, and enchantments. The ancient Hawaiians believed these stones were the tears of the goddess Pele brought to the surface by volcanoes.Recently, spinel was recognized as a modern August birthstone option.The traditional August birthstone is sardonyx, a red and white variety of chalcedony.“Gemstone (Sardonyx) Cameo,” portrait of the Roman emperor Trajan and his wife Plotina, ca. 105-115 AD, at the British Museum, by Carole Raddato. Licensed under CC By-SA 2.0.

Although most associated with blue, sapphire comes in a wide variety of colors. In fact, this September birthstone, traditional and modern, occurs in every color except red. (Sapphire, by definition, is the non-red gem variety of corundum). Sapphires have many symbolic associations and a rich folklore. Traditionally, this stone was believed to protect your loved ones from harm. In the Middle Ages, Christian clergy wore blue sapphires as symbols of heaven. For many gem enthusiasts, these gems now symbolize wisdom, purity, and faith.Durable sapphires make great gems for daily wear jewelry. Typically, pure blue stones or blue stones with a green or purple tint rank as the most valuable. However, you can also choose beautiful pink, purple, orange, green, and yellow as well as colorless stones. Star sapphires are some of the most desired gems in the world.“Diamond and Blue Sapphire Pendant” by Bharat Mirchandani. Licensed under CC By-SA 2.0.

Tourmaline is the modern October birthstone. These gems come in many varieties and colors, including beautiful multicolored stones.“Earring,” white gold, pink tourmaline, and brilliant diamonds, by Mauro Cateb. Licensed under CC By 2.0.Opal is the traditional October birthstone. These gems are perhaps most well known for their play of colors and have their own unique gem grading system. Opals also have one of the most divergent sets of symbolic associations. You can choose to believe they’re the luckiest or unluckiest gems in the world.“Opal Necklace” by James Petts. Licensed under CC By-SA 2.0.

Once upon a time, before modern gemology, all yellow stones were considered topaz. In the early 20thcentury, gemologists defined topaz as a distinct gem species which included yellow as well as blue, pink, purple, and other varieties. So, the traditional November birthstone transformed into the modern version, yellow or golden topaz. However, you can pick the topaz color you like best for birthstone jewelry.Another modern November option, citrine is an attractive yellow gem. Just keep in mind that while citrine (a quartz) and topaz are sometimes confused, they are distinct gem species. They also have very different price ranges.Historically, people believed golden topaz could attract wealth as well as protect the health of your mind and body. In particular, golden topaz could help your eyesight. Today, some view this gem as a sign of love and affection.“Topaz and Gold Ring” by Mauro Cateb. Licensed under CC By 2.0.

While opaque turquoise and lapis lazuli were the traditional December birthstones, the modern shift to transparent gems made tanzanite, blue topaz, and blue zircon the modern alternatives.“Wirewrapped Cuff, blue gemstones,” copper cuff with turquoise and sodalite beads, by D Fredericks. Licensed under CC By 2.0.Although zircon colors also include yellow, orange, green, red, and colorless, blue stones are the officially designated birthstones. However, you can choose whatever color you prefer. Some people believe zircons may relieve pain and boost your appetite.When shopping for these gems, look for clear stones with few to no flaws and consistent color throughout. 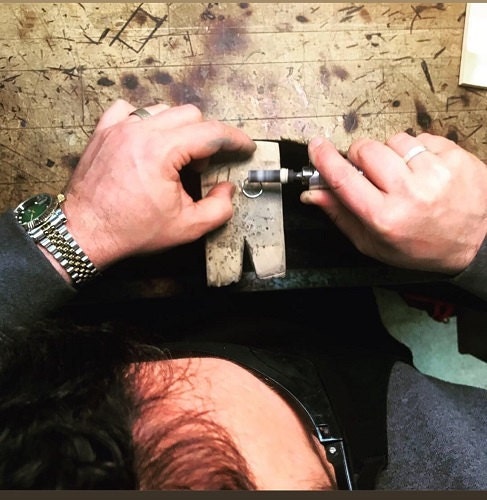 Previous Post How do I calculate my ring size?
Next Post Wedding Anniversary - Traditional Theme
0 items in your cart